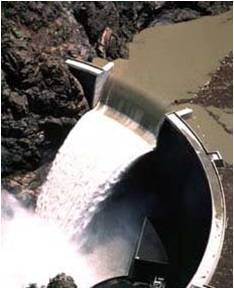 When you first switch away from synchronous sequential code, you realize that you can send hundreds of HTTP requests per second because you don't wait for one request to finish before sending the next one. These requests can be anything, but I focus on HTTP requests in this post because they are ubiquitous: you'll use them whether you're using an API, crawling the web or communicating between microservices. If the receiving endpoint is prepared, sending many requests per second might be OK, but in many cases it's not.

We're going to use the token bucket algorithm for rate limiting. The bucket contains tokens, and you consume one token to perform one call. If the bucket is empty, you cannot perform more calls: you need to wait for at least one new token. Before sending requests, the bucket starts with a number of tokens, and you add a new token at fixed intervals unless the bucket is full. If you add one token every 100ms, in the long run you will not make more than ten requests per second, even if you may have short bursts where you send more than this.

You may want to read this again before continuing: it's nothing complicated, but a single read might not be enough!

Okay, let's do this. The idea is general, but let's see how to limit calls done from the aiohttp library. This is going to be a class named RateLimiter that will intercept HTTP GET requests. This class will decorate the aiohttp ClientSession class and will be used like this:

So that's a lot like usual aiohttp code, except that we're using await client.get() instead of client.get() because it simplifies our code below.

Let's see the code and comment it as we go, as if we were using literate programming.

We allow 10 requests per second and start with 10 available requests. For a web crawler, say, we don't want to allow MAX_TOKENS to be too high because you either have a lot of requests to send or nothing to do, so this would only result in a high burst at the beginning for no good reason. For other applications, it may make sense to use other values.

As we've seen in our example code above, we receive the client object and will use it to perform calls. Next, some bookkeeping: we want to store the current number of tokens (the bucket starts full) and how much time has elapsed between two buckets fills. We use time.monotonic() to ensure the time always goes forward, which is a nice property you don't get with time.time().

When we call client.get(), we first wait for a token to be free, then go on to perform the actual call. This is remarkably similar to synchronous code, except that we won't block the whole process during the wait_for_token call: other code may run during the waits. I only specify get() here, but in the real world you would probably want to cover other methods such as post().

How do we wait for new tokens?

If we have one token ready, we use it and return to the get() call. Note that if we were using threads, "using a token" would need a lock and would be error-prone. Here, it's easy, you only need to decrement it because you know that no other code will be executing at the same time: all other coroutines will be either waiting their turn or waiting for I/O.

Now, if there are not enough tokens, we need to see if new ones became available since the last update. If not, just sleep. I'm using a one-second sleep here, but in real code you would start with a smaller delay and use exponential back-off.

The only part of the puzzle left is adding new tokens.

We simply look at the number of tokens we should add since the last update and make sure that we do not add more than MAX_TOKENS.

The only trick here is that we only change self.tokens if it would allow for a new request, that is, make self.tokens go above 1. Indeed, adding and multiplicating small numbers might lead to incorrect results due to low clock resolution or underflows. I am not certain this is actually a problem here, but being sure it never becomes one is nice!

If you want to use that code, here's a full example so you don't have to copy/paste my code above!

We don't have to worry about tokens or updated_at being updated by something else. The code looks a lot like the synchronous code we're used to, and we can reason about it the same way. But we still get great throughput! The only downside is that you need to sprinkle your code with async and await which prevents you to use it in a synchronous context.

Thanks to Kyrean and Miquel for their insightful comments which led to corrections in this blog post.